Artificial lighting is a versatile tool that can be utilized to transform a space. It can be used in public areas to enhance performance and worship productions or within private establishments as functional or decorative lighting solutions. A survey of lighting professionals concluded that color is a critical consideration in all lighting applications and that it is typically more important than light efficacy. Why is this? Similar to the way physical color influences psychology, the color of lighting also has a physiological effect on humans.

While many people acknowledge that the color in our everyday lives, such as wall paint and dècor, has a psychological influence on our moods, some may not realize how much lighting color impacts our health. Predictable patterns of natural light have played an important role in regulating intrinsic circadian rhythms. The timed exposure to environmental cycles of light and darkness help regulate everything from our gene expression and cellular function to our hormone secretion and sleeping behavior. Artificial light, however, creates unregulated exposure that can disrupt these systems.

Aberrant light, like electronic light, is a near-constant intrusion in our lives. The level of light and duration of exposure can impact the body in many ways, including stimulating the circadian system and suppressing melatonin excretion. Although all light affects us, the wavelengths of colored lighting may impact our psychological and physiological systems in varied ways. As a facility manager or production director, it’s important that you understand the importance of color in lighting and be proactive in managing the way people are exposed to your lighting.

Illuminated Integration specializes in the design and installation of AVL builds. Our experience in integrating customized lighting designs for theatrical, residential, architectural and exterior applications has given us continuous opportunities to discover how to incorporate the desired lighting configuration in ways that properly manage the exposure of colored light. We believe any client who is considering a new lighting design-build should increase their knowledge regarding the properties of colored light, its effect on human physiology and ways in which it can be responsibly integrated into a designated space.

Those who plan on installing a new lighting design-build should make themselves familiar with the relevant color terminology:

Learning these terms is an effective way to begin to understand how your lighting system functions and how it will interact with the colors of the surfaces, backdrops and other elements present in your space. Three other terms you should also be aware of involve negative retinal effects resulting from an over-assimilation of light energy:

As you design your lighting build, it’s important to consider how your use of colored lighting will impact those exposed to it for varying periods of time. Understanding not only what color they’re seeing, but also how the color-sensitive cones of the eyes will process this light, is critical to meeting observational needs. With this knowledge, you can then move on to discovering how these types of colored light impact the psychology of those viewing it.

Color in lighting can be transformative. Each color of light has a wavelength that affects our psychology and physiology. In many ways, proper lighting can offer individuals a number of benefits. In work areas where natural light is unavailable, blue or cooler-colored light has been shown to increase employee alertness and reduce eye strain. Warm and middle-colored light tones, like yellow, are also used to create inviting, intimate or relaxing spaces. Red light, in addition, has been shown to improve memory and attention to detail.

With the exception of tetrachromats, who have an increased sensitivity to color, most individuals will perceive a color to be the same as another individual. Simply put, two people can point to the sky and agree it appears blue. Although a color itself is often defined objectively, an individual can also view color with a subjective connotation. Color causes us to react emotionally. The relationship between color and emotion can be traced to a variety of factors such as cultural, personal and evolutionary influences.

There is no “correct” meaning of individual colors. However, each color may contain a set of commonly associated interpretations:

Light also has a profound effect on human circadian physiology. The circadian system relies on routine exposure patterns of light and darkness to reset our biological clock. Everything from the intensity and duration to the wavelength and timing of light has an impact on this system. Even the color of light can have a significant impact on the internal clock alignment.

The specialized photosensitive cells within the retina detect light and send signals to the brain that regulate mood. Blue wavelengths, for example, influence circadian rhythm both positively and negatively. During the day, it increases alertness and mood. However, at night, even dim blue wavelengths disrupt the secretion of melatonin more than any other color wavelength. These retinal cells seem to be least sensitive to red lights.

Along with mood and behavioral disorders, disruptions to the circadian system may have the potential to result in other negative health complications including the development of diabetes, obesity, hypertension, cardiac arrhythmias and cardiovascular disease. Unfortunately, exposure to any light during times in which the circadian rhythm naturally requires darkness — even limited light from computer monitors, televisions and smartphones — can have negative impacts on sleep patterns.

The Importance of Color Temperature in Light Sources

We can determine the color temperature of a light source by comparing the color of light it emits to a comparative radiator that is heated to a level that emits the same color of light. Once the black body reaches the desired light color, it can be calculated into Kelvin using the formula K = °C + 273. These measurements create a scale in which we can display degrees of Kelvin in relation to the colors that natural daylight and traditional sources emit. 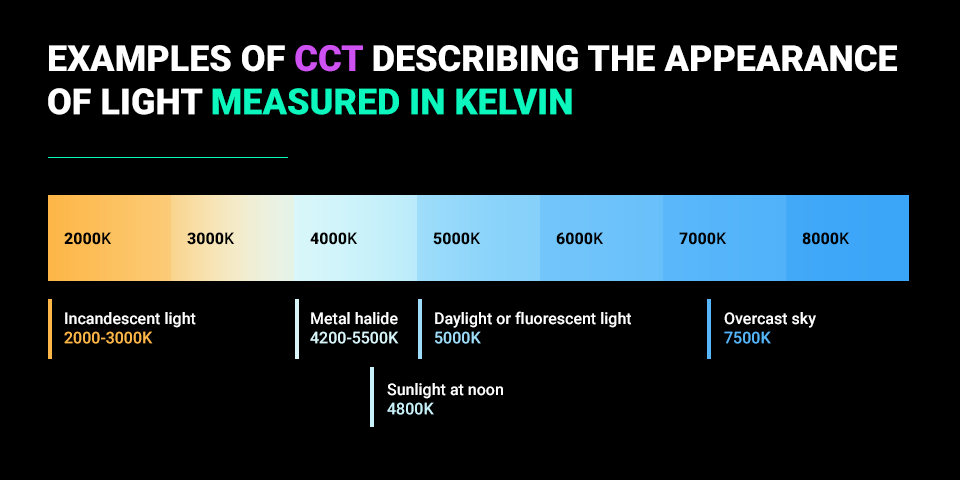 Some examples of CCT describing the appearance of light measured in Kelvin include:

How the Color Rendering Index Is Used

The Color Rendering Index is the only internationally and formally recognized color rendering metric system. It is utilized as a metric on a scale of 1-100 and describes how accurately a source of light can render the “real” color of an object. 100 is the maximum rating on the index and depicts a render as if a natural light source was hitting it. A lower render on the scale displays a less “natural” render. Light sources that fall below 50 on this scale are considered poor or unnatural renders. 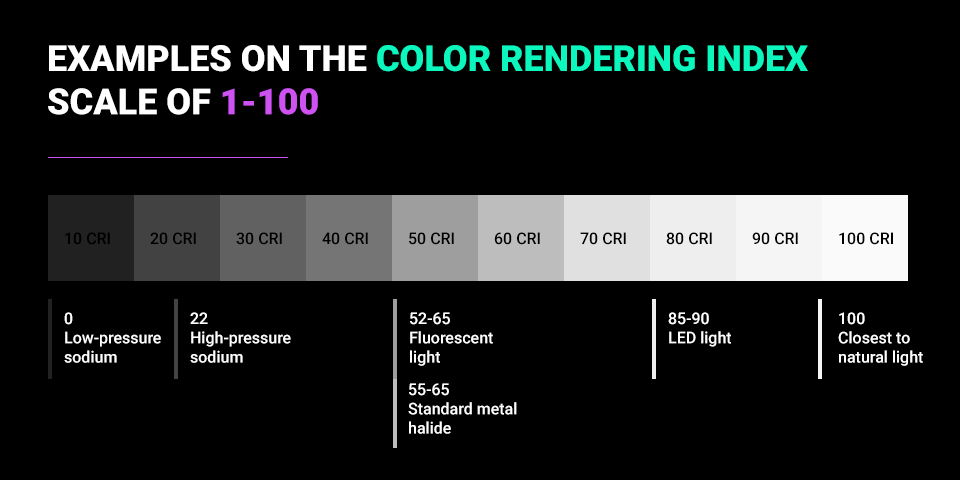 Some examples on the Color Rendering Index Scale of 1-100 include:

Though the CIE Color Rendering Index had been utilized for decades, many groups have acknowledged that the CRI could not accurately deliver results that wholly represent the way humans perceive color. As technology advanced and became integrated into society, the CRI was unable to provide an accurate metric that depicted the true visual experience. A new standard was developed and introduced internationally in hopes that it could produce accurate color rendering measurements.

The IES Method for Evaluating Light Source Color Rendition, known as the IES TM-30-15, attempts to accomplish the following objectives:

The IES TM-30-15 has a number of advantages over the Color Rendering Index, including:

Another significant advantage of using the TM-30-15 is that it can be applied to white light LEDs. Though the CRI was used for half a century in comparing HID lamps to fluorescent lamps, the International Commission on Illumination did not advise using their Color Rendering Index with LEDs. LED lighting continues to grow in popularity because of its energy efficiency compared to the standard incandescent bulbs that release more heat than produce energy. With LED technology advancing, the TM-30-15 can be successfully applied to this context.

The Color Rendition Index has two key benefits: simplicity and familiarity. However, these benefits may be diluted due to the limitations of the CRI that cannot accurately address or measure the rendering of dozens of colors. Though the TM-30-15 is new and is not used as a standard system of measurement, its successful application in delivering more detailed information regarding color rendering characterization makes it a versatile resource.

Illuminated Integration Understands the Importance of Color in Lighting

Integrating colored lighting into your AVL setup can be an extremely useful tool to create a powerfully immersive experience for your audience. Unfortunately, when this form of lighting is used incorrectly, it can have negative psychological and physiological effects on those exposed to it. As a facility manager, building owner or production director, it’s vital that you understand how to properly utilize lighting to achieve the desired results without creating discomfort. When you’re ready to create a new lighting design-build, allow Illuminated Integration to help.

Professionals throughout the industry recognize how critical correct color lighting is to their performances and trust their design-build to Illuminated Integration’s team of AVL consultants. We create exclusive designs customized to fit the spatial requirements of your facility and the versatile needs of your productions. We’re able to develop and install an integrated AVL design for use in theaters, homes, gathering spaces and building exteriors. Let Illuminated Integration help you draft and implement a one-of-a-kind integrated lighting design today.