While sound design might seem like a thoroughly modern concept, people throughout the ages have adopted various methods of maximizing their structures to improve acoustics. Visitors to many of these sites have been fascinated by sound’s impressive ability to travel through these spaces without microphones, amplifiers or other technology. By learning how people in the past improved acoustics in their structures through design, you can gain insights into making your space sound better.

Experts in the properties of sound work diligently to improve acoustics in structures. However, the legend of good acoustics holds that ancient people mastered these techniques. Did they have more insight into improving sound delivery than people do today? Can modern structures take lessons from the acoustics of ancient Greek theaters or historic churches? Did sound quality impact the experiences people had in the past?

The answers to these questions depend on many factors, including how those structures amplified sound quality.

Acoustic Properties of the Stone Circle

The prehistoric stone circle Stonehenge is one of the world’s most famous landmarks. Even today, people speculate about these massive standing stones’ purpose and arrangement. A possible reason could have its roots in how the stones amplified sound for those within the structure.

One group of scientists examined whether Stonehenge’s layout might have amplified sound for those standing inside the circle. Interestingly, they also learned the sounds did not echo within the stones, nor could people standing outside clearly hear sounds from inside. Sounds from outside the stone circle also did not seep into the inner circle, creating a sense of privacy and quiet inside the stones.

If you visit Stonehenge today, you won’t experience these acoustics because many of the original stones have fallen. However, you can get a more profound appreciation of ancient sound amplification knowledge by seeing the existing stones’ layout.

Throughout time, theatrical buildings have required good acoustics to ensure everyone could understand the story playing out on the stage. Without good sound quality, theatergoers might not understand the actors because their words would be unintelligible. Therefore, theaters have been a prime site to turn to when looking at the quality of ancient acoustics.

The famous ancient theater structures remaining today include the Greek amphitheater at Epidaurus. This semicircular place had a stage at the center on a lower level than the raised limestone seating surrounding it. Famously, visitors sitting in the back of this type of ancient theater could still clearly hear the music and actors on the stage.

The angle of the seats allowed each attendee to see the stage. Today, people who design stadiums and movie theaters use a similar seating arrangement. However, researchers found the amphitheater’s seating did not improve people’s hearing ability. The stone material of the seats did. It appears the ancient Greeks tried to replicate Epidaurus’ design but used different materials for the seats, resulting in worse sound quality than at the original site.

The limestone seats at Epidaurus were unique due to their corrugated surfaces and hard material. Stone filtered out lower-frequency sounds entering the theater from outside, while reflecting the performers’ higher-frequency voices up to the top of the seating area. This arrangement seems to mirror Stonehenge’s remarkable ability to amplify sound inside the stone circle.

Though the limestone seats also filtered out lower frequencies coming from inside the theater, viewers in the back would still have been able to hear the higher frequencies, while their brains naturally filled in the missing lower frequencies. Your brain uses this fill-in-the-blanks strategy when you listen to music or voices on small speakers that don’t generate low sounds.

One phenomenon about the ancient theater of Epidaurus is its continued amplification of loudly spoken words from the stage while it fails to project quieter sounds. Researchers at the site assume ancient theatergoers in the past would still have been able to hear clearly from the back rows during performances. Reasons for this excellent sound quality include actors wearing masks to project their voices, backdrops on the stage to reflect sound and newer materials better able to move sound up through the stadium instead of the currently weathered stones.

Pyramids rise out of the jungles of Central America and Mexico, amazing visitors with their size and mystifying them with their purposes. Likely these structures built by Mayans and Aztecs played significant roles in their societies as cultural and religious landmarks.

Surprising many visitors, these pyramids are excellent at projecting sound. When standing at the base of Mayan-built El Castillo at Chichen Itza, clapping your hands creates a chirping echo that sounds like the sacred quetzal bird. While the pyramid builders did not necessarily know the structure would produce that specific sound, they may have understood its design would influence sounds. For example, the pyramid makes a noise like rainfall when people walk up the steps, which could refer to the importance of the rain god in the Mayan culture.

Pyramids appear throughout Mesoamerica, and most of them share a similar tiered design. Due to a speaker’s ability to project their voice better while standing on the tall pyramid, Mayan and Aztec priests and politicians may have used these buildings to speak to the people. Because they would speak in an open space, reverberation was not a concern. Similarly, modern stages often have a higher construction to allow the audience to hear speakers’ voices without getting absorbed by people standing in front of them.

Even today, places of worship continue to focus on acoustics to ensure proper music and spoken word delivery to attendees. Historic churches had similar goals with varying levels of success. Historically, churches have played central roles in the lives of many Europeans for the last two millennia. There are several examples of how churches have used acoustics to impact the experiences of parishioners and clergy.

Churches’ focus over time has changed, with Catholic cathedrals emphasizing the mysterious side of faith, while Protestant churches concentrate more on delivering words. To this end, the church designs for these different faiths also needed to strike a balance between the awe-inspiring reverberation of a Catholic cathedral and the ringing acoustics of the pastor’s words in a Protestant church. Over time, vacillations occurred between the reverberating aesthetic sound quality of Catholic churches and the semantic acoustics for optimum voice clarity of Calvinist Protestant churches. However, causality between religious beliefs and the acoustics of their specific worship spaces remains out of reach, while correlation appears evident.

One example of the development of sound delivery in historic churches is how sound from the choir area of Spanish cathedrals changed. In Spanish cathedrals, the choir stalls sit in the center of the nave with stone walls on three sides. The choir area and chancel around the altar create a unified space for the clergy and separate the nave into two distinct areas for the priests and congregants. The sound quality in choir areas allowed for intelligibly sung text, such as the Gregorian chant. While too many variations over time in cathedral wall sizes and ceiling heights do not allow for direct sound comparisons, even the earliest Spanish cathedrals achieved good acoustics in their choir areas. Compared to the cathedral’s areas for the faithful, the sound quality in the choir area was better and more intelligible.

Another example is the domed Lazarica church, a medieval Orthodox church in Serbia. This church’s dome appears to improve the intelligibility of speech. An experiment that closed the dome with a flat ceiling did not change the reverberation time in the church, but it reduced the clarity of speech. Consequently, the building’s domed design helped those inside the church better hear the priest’s words.

Modern church designers continue to use some of the conventional designs of historic churches, which may contribute to the acoustics, despite having modern speakers and audio equipment to augment sound delivery. 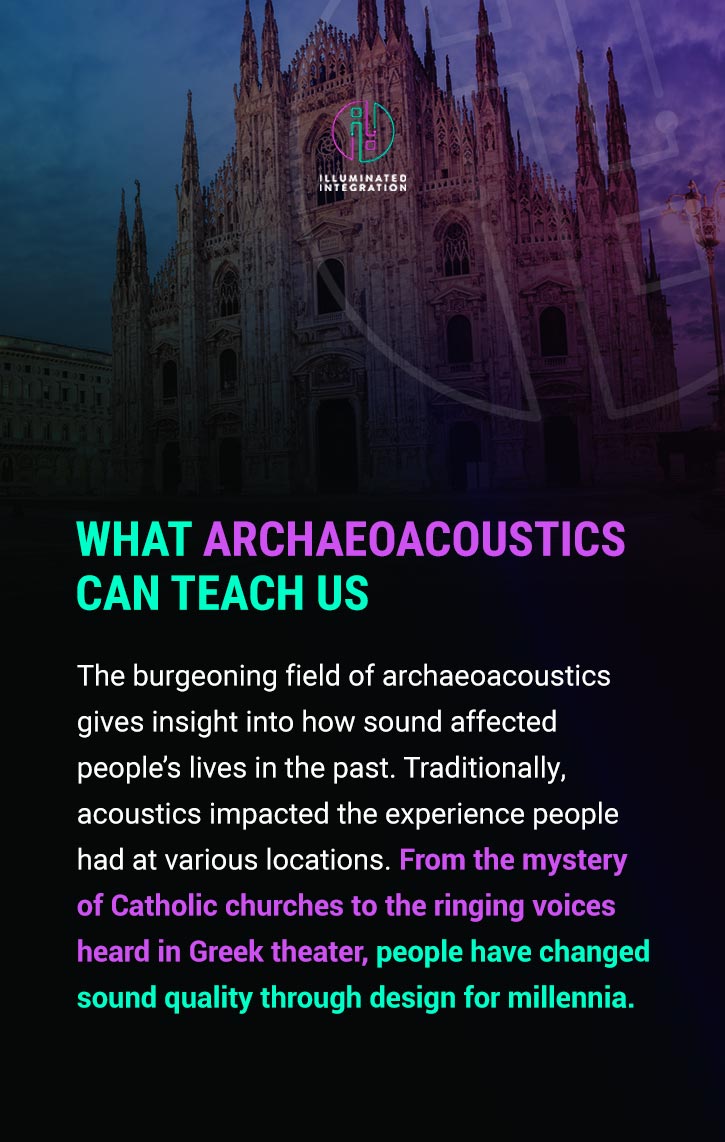 What Archaeoacoustics Can Teach Us

The burgeoning field of archaeoacoustics gives insight into how sound affected people’s lives in the past. Traditionally, acoustics impacted the experience people had at various locations. From the mystery of Catholic churches to the ringing voices heard in Greek theater, people have changed sound quality through design for millennia.

Archaeologists who discovered ancient flutes in German caves did not find them in places that would produce the best sound quality, but in areas that created the most reverberations. Prehistoric French people may have used conch shells as musical instruments inside caves to boost their sounds. Lastly, the Acoma tribe in the American Southwest legendarily migrated to the spot of the perfect echo, stopping at each site to test the reverberation quality until they finally settled at the modern site of Petroglyph National Monument.

Historically, rock art locations have not coincided with economic sites but with religious places. Theorists speculate that the sites’ acoustics contributed to their use as sacred locations, mainly from the firmly held anthropological belief that ritual cannot exist without music. Studying the acoustics in these areas examines whether human-produced sounds created natural echoes or amplification, or if naturally occurring sounds influenced the locations of religious sites and rock art. Therefore, sound, religion and art seem to have intricate links that predate written history.

Another instance of natural acoustics determining the sites of ancient structures is at the sanctuary ruins built by the Greeks for Zeus on Mount Lykaion. Despite the site having a complex of buildings from ancient times, today it only has crumbling remains of structures and a few foundations.

The earliest buildings on the site date to the seventh century BCE, much earlier than people began worshiping at the site around 1600 BCE. Natural acoustics may have come into play to determine the location of the sanctuary dedicated to Zeus and other buildings in the area. For instance, one hill allowed a speaker to stand a third of the way up the incline and still speak clearly to people in the hippodrome or in its seats, 100 and 90 meters away, respectively. In contrast, areas for the fountains and athletic baths did not have good sound delivery.

Today, sound design remains an essential part of worship centers and other places where people gather. Stadiums, theaters, schools, nightclubs, hotels, restaurants, casinos and places of worship all depend on good acoustics to improve listeners’ understanding of spoken words or create an ideal soundscape for fun, reflection or study.

For example, Carnegie Hall has world-class acoustics developed by its architect William Burnet Tuthill and Danish consultant Dankmar Adlar. The building immediately became renowned for its sound quality after it opened to the public in 1889. The simple design of the stage and seating areas allow for better sound delivery. Tuthill eschewed typical theater design conventions, such as heavy curtains, large chandeliers and frescoed walls. He realized these decorative elements would disrupt sound delivery from the stage to the seats. Inside Carnegie Hall, the domed ceiling, elliptical theater, elongated stage and smooth walls create optimum acoustics. The softest sounds from the stage easily travel to the back seats of the highest balcony. Thus, modern Carnegie Hall successfully creates the legendary acoustics attributed to the ancient Greek theater Epidaurus, which today does not produce the same effects.

When designing your building, you need to focus on acoustics to better deliver music or spoken words. Sound engineers can help you arrange your space to get the acoustics you need. Consult with them to get better acoustics before construction starts.

Learn More About Improving Acoustics in Your Building