Stage lighting is an art form. It’s used to illuminate a performance venue and make an impact on an event, giving visual direction and shaping the environment. There’s a lot to learn about stage lighting. In this post, we’ll cover some of the foundations of stage lighting that are helpful for anyone in the live performance space to understand.

What’s the Goal of Stage Lighting?

To better understand the topic of stage lighting, it helps to familiarize yourself with some stage lighting names for items and concepts that commonly come up in this field: 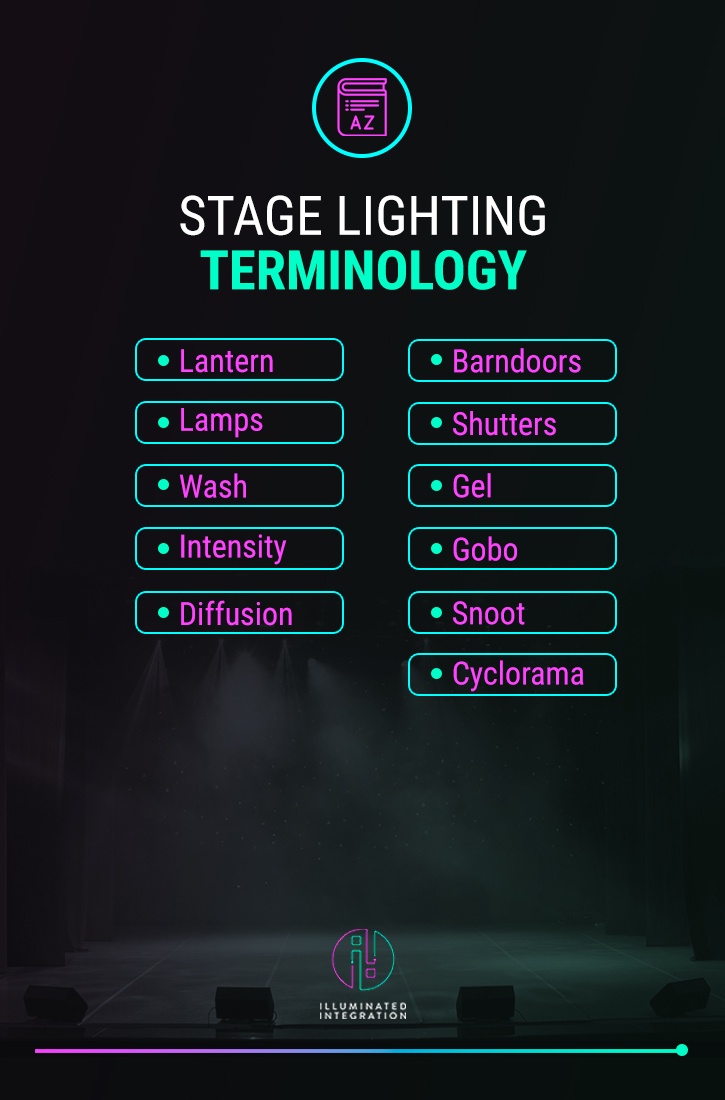 There are several types of lighting fixtures that are common in stage lighting design. Each type is designed for a unique purpose, so most stage lighting setups will include multiple types of lanterns. These fixtures may include:

An ellipsoidal reflector spotlight produces an intense, well-defined beam of light that is perfect for front lighting. You can adjust the focus with soft or sharp edges, use shutters to adjust the shape of the lighting and keep the light from bleeding into areas you want to remain dark. These lights can also hold gobos and gels so you can create patterns and colors with them.

A followspot is a type of spotlight, so it casts an intense, focused beam of light to give extra focus to a performer moving around onstage. These lights are especially useful when you aren’t sure what path a performer will take and need to respond in real time since they are traditionally operated manually. In addition to adjusting the positioning of the followspot, the operator can also adjust the size and the intensity level of the beam, and they can easily adjust the color with built-in panels.

These lights are named after their inventor, Augustin Fresnel. What makes these lights unique is that they have a lens made of concentric rings. The light is brightest at the center ring and softens the closer it gets to the edges. These lights are a good choice for washes, though they can also produce more narrow beams of light with a soft edge. You cannot use shutters or patterns on these lights.

A parabolic aluminized reflector (PAR) can is a staple in stage lighting. PAR cans are sealed-beam lamps in cylindrical metal casings. These lights are similar to vehicle headlights and are simplistic in their design. They don’t give you precision with focus or zoom options, but you can adjust them to create horizontal or vertical beams. You can choose from standard and LED options and can use gels to create colored lights.

Remember that a “cyc” is a large cloth backdrop. Accordingly, a cyc light is an open-faced fixture that gives an even wash of light over a cyc or another type of vertical surface. These lights can be positioned on the floor or hung close to the backdrop so they can effectively cover the backdrop in a sheet of light.

Strip lights can also be used as cyc lights, but these lights are wider than most cyc lights. They consist of multiple lamps arranged in a horizontal row. A strip light is what many lighting engineers use to add a large amount of color coverage to a stage. They can also allow you to mix colors. These lights come in both standard and LED varieties.

With the tools of color and texture at their disposal, lighting designers can heavily influence the visuals and atmosphere of a production. As we’ve seen, gels allow lighting technicians to change the color of lights. They can even layer or combine gels to create color variations. In using different colored lights to illuminate a scene, lighting designers may take one of these approaches:

Colored lighting can invoke a certain mood or contribute to the overall feel of a scene, but that’s not all. Changes in the lighting’s color scheme can also act symbolically and be associated with certain themes or characters in a show. For example, a lighting designer for a production of “Swan Lake” noted in an interview that, while the show’s color palette is mostly white, the lighting incorporates a bit of blue when the Swan is onstage.

Texture is another important way lighting designers can directly impact the visuals in a scene. By using gobos with patterns on them, lighting designers can transform the look of a scene. Even in productions where sets are minimal, the right lighting pattern can create the impression that the performers are in a jungle, in the city, outside on a starry night or in a church with a stained glass window.

At this point, you may be wondering how lighting designers plan the lighting for a stage production. This is an involved process that starts with reading the script and extends all the way to the live performance. After familiarizing themselves with the production — in terms of the characters, plot and the set that will be onstage — a lighting designer can begin to develop a plan.

This plan will start with dividing the stage into areas that require independent lighting control. For productions that use the whole stage for most scenes, the lighting designer will designate general segments that are evenly divided across the stage. The simplest example would be a center segment with a side segment on stage left and stage right.

For productions with more segmented sets and scenes that take place at different parts of the stage, there will be more definitive, natural area designations for the lighting designer to start with. For instance, there may be a spot on the stage where a narrator appears periodically to speak or where a soloist will stand to perform during an orchestra concert. You would want this spot to be its own area.

The way a designer designates areas will entirely depend on the production and the set, so there is no one-size-fits-all approach. Each new production a lighting designer works on must start from the ground up.

After the designer divides the stage by area, they will think about each area in terms of color. Do certain areas need to have their own controllable variations in color? In some cases, you may be able to group adjacent segments on the stage. Or you may need each segment to have its own color controls.

In the early stages of their design, lighting professionals tend to think generally about color in terms of warm, cool and neutral lighting. They can also begin to think more specifically about individual colors if they know their colors will differ decidedly from area to area on the stage.

Installing light fixtures is a task best left to a trusted professional who has the necessary equipment and expertise in how to hang stage lights. The most important thing to prioritize is safety. Professional lighting installers will typically attach lanterns to a steel pipe or truss using lighting clamps. As installers connect the lights to the pipe or truss, they will also use a safety cable, which wraps around both the truss and the yoke or handle of the fixture, to secure it further.

All the cabling for lighting should be run overhead whenever possible. Some pipes, called internally-wired bars (IWBs), are equipped with sockets so you can power your lights in a simpler fashion. When cable needs to run across the floor, it’s best to create a recessed track for the cable so it isn’t a tripping hazard or an obstacle for moving sets.

The positioning of lights depends on the way the designer has segmented the stage and the stage lighting angles they want to achieve. There will likely be several groupings of lights surrounding the stage. Note that some lights, like a followspot, aren’t hung at all. They are freestanding and may be positioned in a variety of points within the theater or arena.

How to Work With a Lighting Designer

The right lighting design can transform a good production into a memorable performance. Through the right angles, intensity levels, colors and textures, light can enhance a play, concert, musical, dance or worship service. Illuminated Integration is a design-build audio, video and lighting (AVL) firm that can help you create a stage lighting setup from the ground up or take your current setup to the next level.

We’ll meet with your team for an in-depth consultation where we discuss your goals and parameters for a lighting design project and learn more about your venue. We can then create an original lighting design that is customized for your stage and your goals. We’ll even install the system and provide ongoing support, making our services turnkey. Contact Illuminated Integration for more information on our custom AVL designs today.